What is more monstrous: one person’s physical deformity or society’s reaction to it? 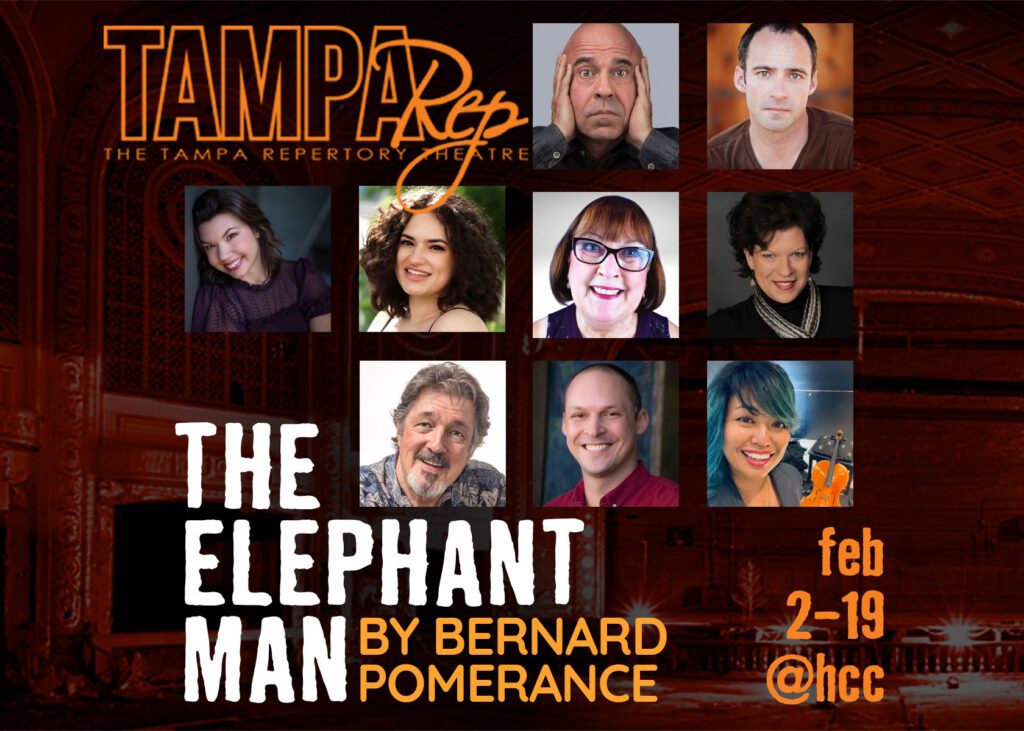 Can society redeem itself to the outcasts it has shunned? Is it possible for the atrocities of exploitation to be forgiven? Can inhumane treatment be reversed through kindness? These are just some of the relevant questions posed in Bernard Pomerance’s touching drama, The Elephant Man. TampaRep’s second show this season will play throughout February at the Hillsborough Community College Ybor Campus in the Performing Arts Building.

“The plays selected for this season are a celebration of our capacities, our vulnerabilities, and the challenges of being human – together. The Elephant Man depicts an exemplary case of human mistreatment, and yet Merrick finds a way to survive and thrive in his circumstances ” says Emilia Sargent, Producing Artistic Director of TampaRep. Sargent will also direct the play.

The 1979 Tony Award winning Best Play explores the short life of an abused and misunderstood man. John Merrick suffered from severe deformities that made it impossible for him to communicate clearly, leading to a life riddled with neglect, misuse and exploitation. Merrick’s appearance kept him from working, loving and living, until a surgeon, Sir Frederick Treves, takes interest in him and gives him sanctuary in a London hospital. News of this medical marvel spreads and he is soon befriended by the
social elite. As Merrick learns how to live in and grapple with a different extreme of society, he is able to offer the unique perspective only an outsider can give, and causes audiences to wonder how much better off he really is.

The Elephant Man has seen numerous remounts since its premiere in 1977 in London. A story of a life lived in complete humiliation is one for the ages. A man seeking a glimmer of peace and hope for an existence without ridicule, Merrick is a fascinating character surrounded by disgust, compassion, and exploitation. Multiple actors have taken a turn in the role including David Bowie, John Hurt, Billy Crudup, and Bradley Cooper. The TampaRep production will star Paul Potenza, a veteran award-winning Tampa area actor & director. Some of Paul’s more notable roles have been with Jobsite Theatre, including star turns in Annapurna, Sex, Drugs, Rock & Roll, and most recently as Renfield in Dracula.

“My study and preparation for The Elephant Man and the character of John Merrick is both daunting and inspiring,” Potenza writes. “For this man to survive through all his severe physical deformities, pain, heartbreak, and injustice is unimaginable. Yet John Merrick did not live in anger. Instead, he exuded a spirit of generosity and faith. Yes, I definitely have my work cut out for me.”

Frederick Treves, the doctor who cares for Merrick, is played by Christopher Marshall, theatre educator at Berkeley Preparatory School and director of TampaRep’s recent The Dreamer Examines His Pillow. Marshall says, “I am most excited to delve into the doctor’s own struggles with the purposes and obligations of medicine in a new scientific age.”

“I’ve particularly enjoyed the research process for this play,” says Georgia Mallory Guy, Artistic Director of ThinkTank Theatre. “The Elephant Man explores themes of beauty, science vs. religion, medical ethics, set against the politics and current events of the 1890’s – imperialism, scientific enlightenment, the 2nd industrial revolution and its effect on everything in the world, including art. I think audiences will be quite surprised with how parallel the story feels to 2023.”

Guy plays the role of Mrs. Kendal, a well-known, successful actress who befriends Merrick. “Kendal is probably the only character who really listens to Merrick, his desires and needs, seeks to understand him and develops a most profound respect for him.”

Sargent adds, “The story illuminates the beauty and resilience of a human soul who, despite a life of public humiliation and exploitation, ultimately determines and executes his outcome through his own choice as a sovereign human being. I think we can all resonate with the need to feel truly seen, respected, and accepted as autonomous individuals.”

TampaRep is thrilled to be working once again with the dedicated staff and artists at HCC Ybor to present this show. The Season Sponsors is The Gobioff Foundation, with Production Sponsors Preschool Experience, Inc. and the Hillsborough County Arts Council. Additionally, the production is supported by Design One Jewelers and an anonymous donor. The ticketing Sponsor is Russell Buchan.

The Elephant Man is the second show of TampaRep’s exciting season-long exploration of responsibility: social, familial, and individual. The final show of the season will be Arthur Miller’s All My Sons at USF Tampa June 1 – 18, 2023.

HEALTH & SAFETY:
TampaRep will follow all local and CDC-suggested COVID safety guidelines at the time of the performances.