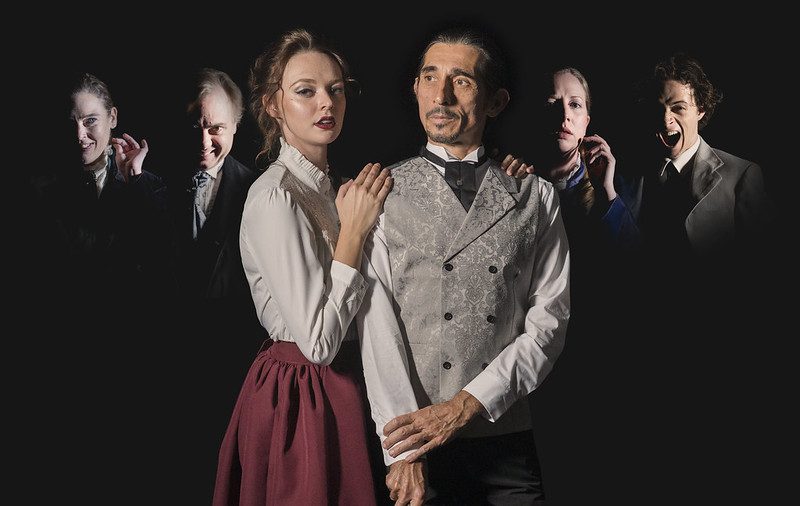 From the novella Strange Case of Dr. Jekyll and Mr. Hyde by Robert Louis Stevenson

Giles Davies: I lived in Hong Kong and my parents met doing community theater in Hong Kong, there was no professional English-speaking theater in Hong Kong at the time. I spent a lot of time growing up in green rooms and rehearsal rooms and when there were opportunities where youngsters were needed in their shows I would get involved. One time, they did a Star Wars spoof and my father, who was an engineer, was assisting in building most of the sets. He built a working R2D2 in our living room and I was the person who sat inside and pushed the buttons on stage.

Giles Davies: I would have to say, YES. It’s really been the only constant throughout my life. What manifested that was watching my mother on stage. We were very close, and I remember my Mum in a musical, “Molly’s Musical”, an annual event. It was an English tradition where you take old songs, and everyone dresses up in Victorian attire and you watch a cabaret style show. My Mum was singing “Waiting at The Church” and I just remember weeping in the audience while watching my mother ‘in distress’ on stage. As I got older, I realized that acting was something near and dear and close to my heart.

Giles Davies:  From my perspective, I think one of the most important messages that speaks the loudest to me in the story is that a whole man is a healthy man. I.E., we have a propensity to deny a part of ourselves and to think ourselves only good. The more that we can accept and deal with our own foibles- the healthier we are. The greater the propensity to deny a part of ourselves, the greater the likelihood that we would become what we despise.

Nicole Smith: I think it’s a lot about just realizing that humans aren’t just good or evil, there’s so many different shades and aspects of us. I also have an idea that this is a bit of a love story about how love can be transformative and ways that you choose to love or not love yourself.

Giles Davies: This production does a nice job of theatricalizing the novel. Hyde is the supernatural character, a part of ourselves, a part that is in all of us. There is a fascinating addition to the play that is not in the book that I really feel like humanizes the character, modernizes the story, and captivates the audience in theatrical conflict. It’s really unique to the play and is simply not present in the novel.

Giles Davies: What’s not to love about the bad guy? I find villains to be more complex characters, often. They have a greater level of complexity. There is a duplicity to villains that is useful on stage. There is only so far, a shining white knight can grow or change. I try not to dislike anything I’m doing, my job being to love what I do so that the audience can love it. Once a villain, always a villain. Because that is my type (the way that I look) it’s something I’ve played continuously throughout my life. Sometimes I’ll have a hard time talking a director into letting me play something that is not quite too villainous. I have really enjoyed playing characters outside of my type.

Giles Davies: Yes! I think that many are familiar with the story and familiar with the premise but not the inner workings of the tale. Even if an audience member is very familiar with the novel, there are enough changes within the theatrical adaptation that it should maintain the element of surprise. In this version, there is a fascinating twist between Jekyll and Hyde where the play starts, and they are very much divided, mirrored reflections but opposites of each other. Through the course of the play, they switch places.

Nicole Smith: I do think that audiences are going to be very surprised that there are multiple actors playing Hyde which ads to that idea that humans are so multifaceted.

Giles Davies: I would say I have a closer proximity to Jekyll. The more I study the script, the more I would say the similarities between us increase. For instance, the fact that he was a global traveler, fascinated with metaphysics, highly intelligent but looking to study things that are outside the norm, and, because of my British upbringing, I have a very strong sense of civility which I think is ever present in Victorian gentlemen.

Giles Davies: Like? I LOVE it! It gives us more time to spend together, which is marvelous, and to work together. You spend your life living with someone, there is nothing like working together in addition. We get to work on lines at home, it’s almost like having a second actor tackle the role so that you can discuss choices, you’ve got another eye besides the director’s, but unlike the director you can ignore their notes.

Nicole Smith: Don’t ignore my notes! Sorry Shawn…you’re the director. It’s really cool realizing you can both live and work with your partner without there being any issues. I don’t know that a lot of couples can do that. I think at the end of the day we really help bring out the best in each other. It just underlines our love of what we do. I just completed my Masters of Fine Arts degree in acting and it’s great to show him what I’ve learned. It helps a relationship to show that you can grow as a human being and an artist. It’s awesome for what Giles and I do.