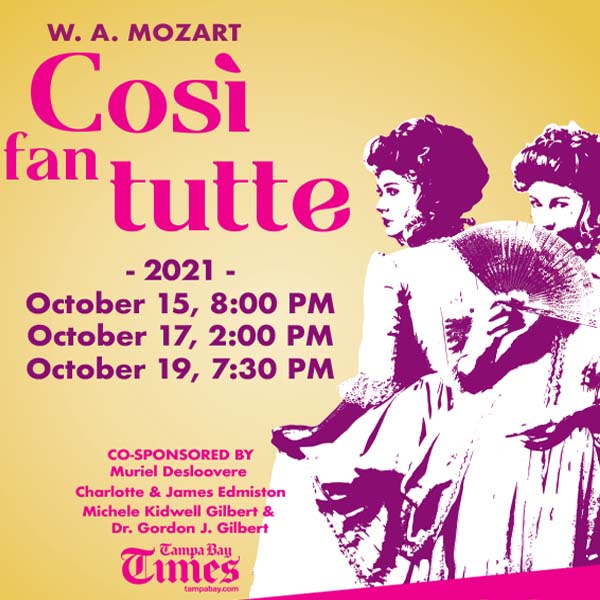 Two young soldiers, Ferrando and Guglielmo, brag about their respective sweethearts, sisters Dorabella and Fiordiligi, and insist that the two women would never cheat on them. Their older and more cynical friend, Don Alfonso, counters by saying that, given the opportunity, there is no such thing as a woman who is incapable of infidelity. The three men decide to make a bet: Ferrando and Guglielmo will spend the next few days doing everything Alfonso says, which Alfonso claims will lead to their lovers betraying them. The two soldiers look forward to their inevitable victory.

Alfonso surprises the two sisters with the unwelcome news that their boyfriends have just been called off to war. The couples bid each other farewell. Don Alfonso bribes the sisters’ maid, the cunning and streetwise Despina, into playing along with his scheme. When two “foreigners” appear and pay suit to the sisters, Don Alfonso’s plot becomes clear. But in the end, who will outsmart whom?

About the St. Petersburg Opera Company

Founded in 2007 by Maestro Mark Sforzini, the mission of the St. Petersburg Opera Company – a not-for-profit 501(c)3 corporation – is to enrich the cultural lives of the residents of and visitors to the Tampa Bay area, by presenting fully staged professional opera productions of the highest quality, and to make opera accessible to present and future audiences through community outreach, educational initiatives, and collaboration with other arts organizations.