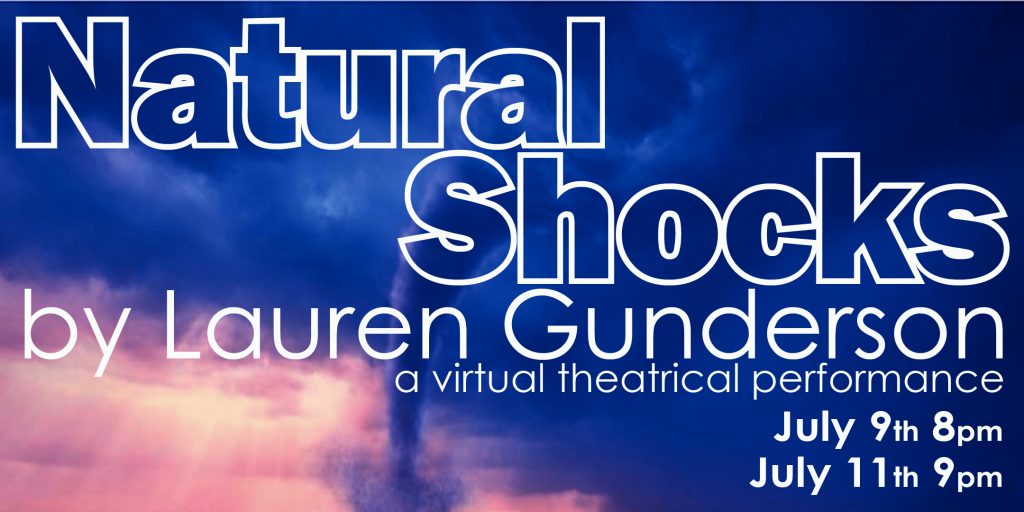 This virtual production follows a woman’s cellphone video into an unfolding disaster; playwright Lauren Gunderson talks with cast and audience after July 9 performance.

Synopsis: You’re scrolling through Facebook, Instagram or Twitter, when you come across a video unlike any you’ve ever seen before. An anxious woman is livestreaming on her cellphone. She says her name’s Angela, and that she’s hiding in her basement from a tornado heading toward her house. The wind starts to pick up outside as Angela keeps broadcasting. She tells us it’s an ironic position for her to be in, since her career as an insurance agent has been based on disasters up to now – “Planning for them, knowing them, outsmarting them. And yet here I am. In the middle of one,” she says. As a numbers nerd with a taste for dark humor, Angela fell in love long ago with actuarial tables which calculate the probabilities of death from various catastrophes. Now they tell her the exact odds against her getting out of two simultaneous dilemmas alive.

In Innovocative Theatre’s online production, playwright Lauren Gunderson’s quirky one-woman show is a confessional by iPhone, as a woman who’s long relied on her intelligence, her charm – and a knack for a well-placed lie – realizes that none of these are going to get her out of her present fix. “As things worsen, she reveals truths she hasn’t shared with anyone else,” notes founding producing artistic director Staci Sabarsky. Natural Shocks’ two livestreaming shows, July 9 and 11, place Innovocative Theater among the first troupes in the region to return to live performance after the coronavirus pandemic shuttered local theaters in March. It also eerily reflects the starkness of social distance and self-quarantine our culture has undergone ever since.

“It’s a moment in history when many of us are feeling isolated, like Angela, and turning to our devices in order to stay connected with our friends and family,” Sabarsky says. “These days, more of us are doing what she does: livestreaming her thoughts to anyone out there who will listen.” The stakes are only heightened as Angela realizes this may well be her final social media post – and her last words to the world. In our current time, Sabarsky notes, a virtual production of Natural Shocks makes more sense than one before a live audience. “Though Angela’s supposed to be alone in her basement, if you’re sitting in a theater, you’re in the basement with her. It makes more sense if she’s livestreaming, transmitting to anyone out there, and doesn’t know who’s tuning in.”
The last production of Innovocative Theatre’s third season also marks a reunion and return for Sabarsky and noted regional actor Marie-Claude Tremblay to the one-person show, a genre that has brought accolades to both. In Innovocative’s first production in 2017, critics praised the “mercurial intensity” of Tremblay’s “shattering performance” in the “sharply unforgettable” solo show Dark Vanilla Jungle for the Tampa International Fringe Festival. Natural Shocks’ playwright Lauren Gunderson, the most produced living playwright in America, will participate in a virtual conversation with the cast and audience following the July 9 performance. To see the production online, patrons may purchase tickets on the company website, innovocativetheatre.org. Audience members will then be emailed a link to a private webpage where they can view the production. Although the venue is virtual, “seating” remains limited: Only 99 tickets are available for each show.

Innovocative Theatre’s production of Natural Shocks will be broadcast online Thursday, July 9 at 8 p.m. and Saturday, July 11 at 9 p.m. Tickets are $10, available online at innovocativetheatre.org. After ticket purchase, audience members will receive a link via email to a private webpage where they can view the production.