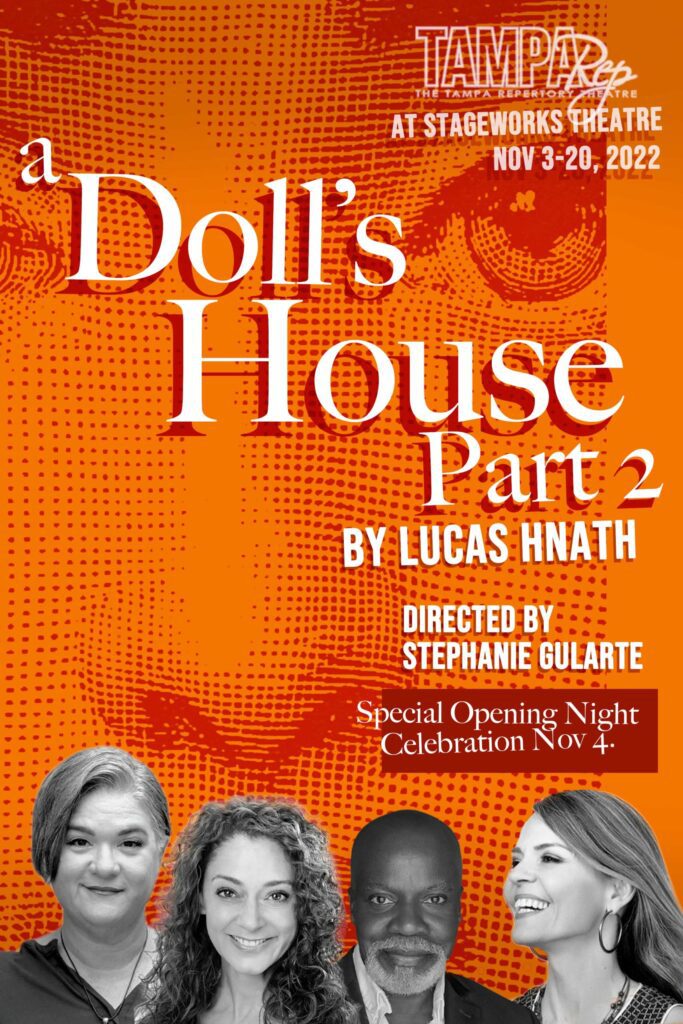 ES: Both plays take place in late 19th century Norway at a time when married women did not have the legal right to conduct business, control their finances, obtain a divorce without proving that the man committed a crime against her. Interestingly, unmarried women obtained these freedoms 20 years prior to married women in Norway, which sets up the reason Nora returns in A Doll’s House, Part 2. In Ibsen’s play, we see a Nora who makes choices that allow her to function inside her constrictive marriage and society. In Hnath’s play we see a Nora who refuses to conform to a society where different rules are imposed based on gender.

TTB: In the original, Nora says she was treated as her father’s “doll-child” and later as a “doll-wife” by Torvald. Since she cannot legally sign financial documents, she resorts to fraud to save her family financially because of Torvald’s inability to work during his convalescence.Upon discovery of her deeds by her husband, he reviles her instead of viewing her actions as altruistic and worthy of his gratitude and support. Instead of defending her, he tells her she is unfit to raise their children. At first glance, it may be easy to judge her decision to leave her family; however, Ibsen gives Nora a strongly voiced reason for why she must leave Torvald and her children:

“Indeed, you were perfectly right. I am not fit for the task. There is another task I must undertake first. I must try and educate myself—you are not the man to help me in that. I must do that for myself. And that is why I am going to leave you now.
I must stand quite alone, if I am to understand myself and everything about me. It is for that reason that I cannot remain with you any longer.”

Nora leaves to find her own voice – to find out who she is as a sovereign human being.

Hnath’s play brings back a Nora who has found her voice and her own thinking and who wants to make the world a place where “everyone is free.” Hnath’s Nora calls into question the inequity that society imposes upon women pointing out all the “bad rules” we have and the fact that people just accept them without question. She challenges marriage as a binding contract and goes so far as to say it “destroys women’s lives” as it is at the time of the play. This is largely because of the expectation that women must be a wife and mother first, and an individual human being last.

Perhaps the biggest difference between the plays is that A Doll’s House, Part 2 is a dark comedy. A Doll’s House, Part 2 is written in modern language which helps with both the humor and illuminating the relationship between us and these characters from the late 19th century. It delves into the ramifications an individual’s choices and actions can cause for others; questions our motives and the lengths we will go in the name of self-sacrificial familial or societal responsibility; challenges us to examine the different roles, expectations, judgements, and constrictive limitations leveraged upon women when they place their own needs above those of their family; and confronts the definition of freedom. There’s a lot in this play! But it does all these things with quick-witted, biting humor.

Henrik Ibsen’s A Doll’s House was groundbreaking and controversial when it originally premiered. It was polarizing. It caused such vitriol reactions, and it was banned in some countries. Ibsen himself was forced to write an alternate ending for German audiences. With Ibsen’s play having such a powerful impact on society in the 19th Century, how does Hnath’s story match the power of impact for the 21 Century audience? Or do you think it needs to be impactful? What’s the power in Hnath’s play?

A Doll’s House, Part 2 is told equitably through the different perspectives of four richly written characters, the play asks us to ponder what we owe to ourselves and to others, what is right or wrong when a choice is made between the two, and the relationship between choice and consequences. It challenges us to question the purpose of marriage and what it should be. It makes us think about how much has really changed in the last 100 years regarding society’s views on where women belong, their social conditioning, and relationship dynamics.

Nora says, “Most of what we do is lying – especially because what we want so badly from other people is for them to love us.”

I think the play brilliantly makes us take a hard look at how we are often dishonest with each other and with ourselves. It makes us really root for each one of these characters at different points in the play, highlighting the fact that there is often a misunderstanding of someone else’s perspective because we are so firmly rooted in our own ideas and assumptions. Maybe if we listen better, and with empathy, fairness, and respect for differences we might find a true marriage ­– or partnership, or relationship. This play makes me care deeply for both Nora and Torvald. Exploring their relationship and personalities is an extraordinary experience with L. Peter Callender as Torvald.

I also think the play reminds us that self-reliance and taking responsibility for our own actions is at the heart of integrity. I hope that the ideas that Nora brings forth regarding personal responsibility for making the world a better place will resonate with the audience.

Does the audience need to be familiar with Ibsen’s A Doll House to follow or be engaged with Hnath’s A Doll’s House, Part 2? What are the challenges you have discovered in the rehearsal process?

Absolutely not! A Doll’s House, Part 2 stands strongly on its own. Those who do know A Doll House will certainly know how different this sequel of sorts is and hopefully make connections. However, there is more than enough information in A Doll’s House, Part 2 to assist those who are unfamiliar with the original with a sense of the characters’ histories. Honestly, the rehearsal process has been wonderfully smooth. Stephanie Gularte is a deft, insightful director who is incredibly effective with actors. She also brings a deep dramaturgical component to the rehearsal process having done a tremendous amount of research on Ibsen, including writing her own adaptation of A Doll’s House. We have spent time reading scenes from the original play and discussing the connections to the ideas and motivations of the characters in A Doll’s House, Part 2.

Have either of you made any enlightened discoveries about the story in working on this play? About yourselves? How has this process affected you?

I have loved this play for a while and was determined to bring it to Tampa Bay audiences. I love that it is a comedy that is also full of challenging, relevant ideas. I knew I resonated with truths stated by all four characters prior to entering the rehearsal process. I have been a bit surprised by how much stepping into Nora has connected to me personally. I wasn’t sure how, as a mother, I would navigate playing a character who left her children. I have fallen in love with Nora and have developed a deep understanding of her motivations, obstacles, pain, and flaws. She is tremendously fun, and she has a lot to say!

What are your hopes for what the audience will take away from experiencing TampaRep’s production of A Doll’s House, Part 2?

I believe there is a universality to the themes in the play and that everyone will be moved at one point or another by each one of the characters. There are no heroes or villains: only human beings in the play.

The play is a family reunion that is relatable, comedic, and thought-provoking on questions about gender inequality, marriage, and human rights, as well as relationship between personal choices and freedom and the part marriage or committed partnership plays in that relationship. The Tampa Repertory Theatre 2022-2023 Season is exploration of responsibility: social, familial, and individual. It is a celebration of our capabilities, our vulnerabilities, and the challenges of being human – together. A Doll’s House, Part 2brings these ideas to the forefront of our thinking in a very human way. It is my hope that audiences will leave with questions and maybe new perspectives, and be excited to discuss what they experienced with their friends and family.

There is always the need for strong ticket sales and greater audience awareness of any theatre production. Yet the past couple of years, the effects of the pandemic have been nearly devastating for many professional theatre companies. Both of you have a history of being strong leaders of theatre companies. What are your thoughts on what theatre companies need from people in the community themselves to strengthen the financial health and longevity of theatre companies?

What I want most from the community is for them to come and see live theatre. This is an art that exists only if it can be a shared experience with an audience. We have introduced a new Choose Your Price model to lower the price barrier and encourage people to come and be a part of the experience. Our tickets are being offered as low as $11. As part of the model, we have also introduced what is called a “true ticket” that is a little more than our regular adult ticket price. It is our hope that patrons with the capacity and desire to do so will purchase tickets at this price which directly supports true production costs.

TampaRep is bringing these transformative, relevant, and compelling stories to the community directly because of the generosity of individual sponsors, the Gobioff Foundation, and The Hillsborough County Arts Council. We need continued help from sponsors who love the arts and want to partner with us to enrich our community and provide an artistic home with a living wage for artists. We truly can’t do what we do without the generous support of our sponsors and donors.